Model predictive control uses a mathematical model of the controlled process to optimally control the controlled variable. For this purpose, the model is continuously compared with the real process variables and used to predict the future behaviour of the process.

We further use this prediction in a real-time optimisation to find the optimal manipulated variable for the current time step. As a result, very fast, stable control of your process is possible, through which we achieve significant improvements (e.g. compared to PID-based concepts). 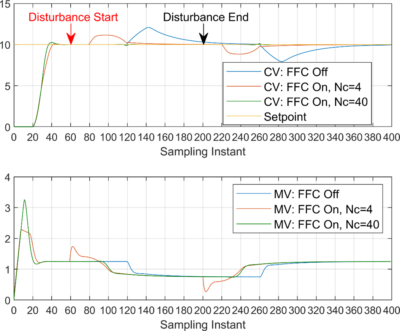 By taking known disturbances into account in the target function, it is possible to compensate for disturbances with very long dead times without critical controlled variable deviation by means of appropriate feedforward control (FFC).

The use of MPC offers significant advantages in the control of non-linear systems. These include, among others, the implicit treatment of manipulated variable constraints as well as the possibility to optimally operate systems very close to these constraints, the simple extension to multivariable systems as well as the model-based consideration of system dead times.

Your advantages of MPC control at a glance

Any number of complex non-linear effects can be represented, with the major limitation that many process data must be available and the model is only valid for plant states present in these process data (no extrapolability).

Neural networks independently extract relevant correlations from large amounts of data. This makes them a valuable addition to physical-logical modelling, which is often insufficient or only feasible with a great deal of effort.

In practice, we use neural networks as so-called black-box models.

We address the following problems with neural networks

In order to achieve optimal control performance and generate long-term added value, we also incorporate concepts from the field of fuzzy control in the sense of holistic APC solutions into the respective specific customer solutions, depending on the problem and objective.

PID controllers are the most versatile type of controller. We adapt the controller behaviour to your specific application through a variety of practical approaches:

Blog article on the topic

Page load link
In order to optimize our website for you and to be able to continuously improve it, we use statistics cookies (Google Analytics). By continuing to use the website, you consent to the use of cookies. Your consent to the use of cookies is stored for 30 days, before that you can delete the cookies at any time via your browser settings. Further information on cookies can be found in our privacy policy. OK
Go to Top