The Welsberg Niederdorf district heating plant cooperative was founded in 2001 in Welsberg in Alta Pusteria (South Tyrol) and has since been supplying the two communities with environmentally friendly district heating. Two biomass boilers and a flue gas condensation plant of the company VAS are available for this purpose. At the end of 2012, after continuous expansion of the district heating network, a thermal oil boiler and another flue gas condensation plant of the company Agro were put into operation. With the thermal oil boiler with ORC module, in addition to the production of hot water, green electricity can also be produced and fed into the power grid.

During a plant visit, the district heating plant was inspected and the current challenges of the plant operation were discussed in a technical meeting with the responsible persons. During operation of the thermal oil boiler, there are regular drops in output, which prevent a permanently high level of green electricity production. This results in a loss of potential revenue from the sale of green power. From the operating data of one year transmitted to us, we were able to derive, visualize and also quantify the possible limitations and savings on a fact-based basis, in order to enable an economic decision-making basis for the operators.

The evaluation of the operating data showed that the potential of increasing the green power production is very large. The goal of our project was to increase the current limitations with control engineering optimizations and minimally invasive process engineering adaptations.

In a detailed analysis on site, the current limitations in electricity production were analyzed in detail, the causes of the limitations were revealed and a plan for project implementation was developed. In the course of the boiler overhaul in the summer, minor process engineering adaptations were carried out on the thermal oil boiler and measurement sensors were retrofitted.

After the thermal oil boiler was restarted at the end of August, we visited the district heating plant again and commissioned the BCS control modules on site within one week. 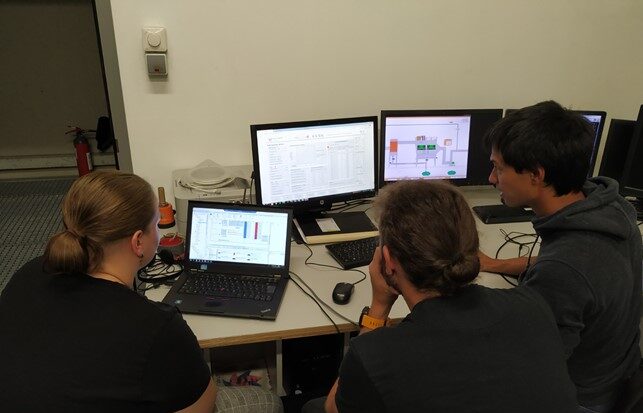 The core element of this project was the new fire output control (BCS FLR) for the thermal oil boiler. With the help of this control, the max. boiler output can be kept constant, which also permanently exhausts the green power production. It soon became apparent that the process engineering adaptations had brought about the expected improvements.

In addition, the BCS modules buffer storage management (BCS PSM) and load hierarchy management (BCS LHM) were programmed in advance and then put into operation on site. Particularly during the transition period, the boilers can be operated quietly and constantly with anticipatory management of the buffer storage.
This is then reflected again in high electricity production. To maximize electricity production, the thermal oil boiler is prioritized.

TheBCS modules and the associated parameterization interface were already carefully prepared in VWE’s offices, so that the commissioning of all BCS modules could be carried out on site on the first day. Subsequently, the firing position and the trends were closely monitored, manual flaps were adjusted and the controllers were tuned. With these small tuning or optimization steps, the BCS control modules were adapted to the plants on site to ensure the most efficient operation possible.

Already the first weeks after commissioning show a very pleasing picture. The green power production is within the targeted range of maximum power generation and the fluctuations in power generation have been significantly reduced.
The Holzkurier was also able to convince itself of our great work during an on-site inspection – click here for the article.
Even after commissioning, the individual controllers will continue to be optimized in order to achieve the best possible results. In the course of this project, a service and maintenance contract for the BCS modules was also concluded. This ensures a simple and uncomplicated support by the experts of VOIGT+WIPP Engineers for our customers also after project completion.